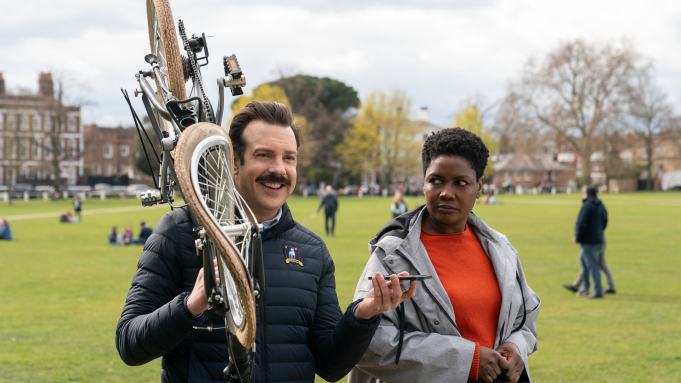 The 28th annual Screen Actors Guild Awards kicked off Sunday against a backdrop of geopolitical conflict and a pandemic that has upended the way that movies and television shows are produced and distributed.

“Ted Lasso,” the story of an optimistic coach tasked with revitalizing a failing U.K. soccer team, won best ensemble in a comedy series while its star and co-creator Jason Sudekis won his second consecutive SAG Award for best actor in a TV comedy. Jean Smart earned her first SAG for best actress in a TV comedy after four previous nominations for her role as a caustic standup in “Hacks.”

“Actors, nobody gets us,” Smart exclaimed. “Seriously, what we do is valuable. I mean, we are the tribes’ storytellers, since man crawled out of the cave. It’s important. We actually are the world’s oldest profession.”

“Squid Game” stars Lee Jung-jae and Jung Ho-yeon won best actor and best actress in a TV drama series for their roles in the survival drama that has become a water-cooler phenomenon. The South Korean show is now the most-watched series in Netflix’s history.

Troy Kotsur earned one of the night’s first awards, picking up best supporting actor for his work as a deaf father in “CODA,” while Ariana DeBose nabbed best supporting actress for her role as the passionate Anita in Steven Spielberg’s remake of “West Side Story.”

Kotsur used his time at the podium to thank the film’s producers for “…believing in us deaf actors and casting us authentically as actors who happen to be deaf.” DeBose said she felt her prize should be shared by the company of “West Side Story.” “I really do believe that when you recognize one of us, you recognize all of us in a way,” she said.

The awards show returned live and (mostly) in-person after SAG dramatically overhauled the previous show as a concession to COVID. A few performers, such as Sudekis, accepted their awards via Zoom. Last year, a shortened one-hour version of the gathering was broadcast — winners were informed of their victories a few days before the telecast and their acceptance speeches were taped in advance. But with vaccines readily available and cases of coronavirus declining, SAG was back in force with stars gathering to celebrate the art of cinema, television and streaming, complete with a red carpet and a packed house. The theme of the show was, appropriately enough, “together again.” But though spirits were buoyant, it was hard to entirely escape the specter of a world at war. Even as the entertainment business joined together to honor itself, Ukrainians were desperately trying to repel Russian invaders in a conflict that threatened the stability of Europe and the rest of the globe. It was a situation that didn’t go unacknowledged.

“While tonight is a celebration, we are all at the same time holding a place in our hearts for the people of Ukraine and sending our thoughts, prayers and hopes for impending peace,” Leslie Odom Jr. said at the start of the broadcast. Those sentiments were echoed by Smart and Fran Drescher, the former star of “The Nanny” who was recently elected president of SAG-AFTRA.