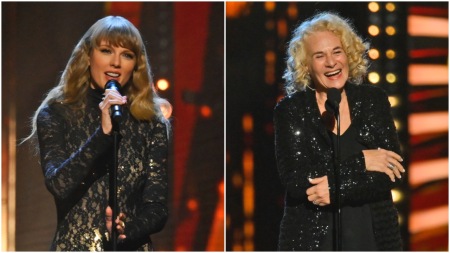 Taylor Swift officially kicked off the 36th annual Rock and Roll Hall of Fame festivities with a tribute to Carole King, singing a show-opening cover of “Will You Love Me Tomorrow.”

Speaking about King’s blockbuster “Tapestry” album, released 50 years ago, Swift said, “It was a watershed moment for humans in the world with feelings and for cats who have big dreams of one day ending up on iconic album covers.”

Swift performed the decades-spanning hit in front of a crowd of 12,000 at the ceremony, held at Cleveland’s Rocket Mortgage Fieldhouse. The pop superstar was wearing a one-piece black and gold jumpsuit by Sarah Regensburger and Greta Constantine, with boots by Louis Vuitton.

That song holds a special place for the 79-year-old singer-songwriter, also famed for hits like “You’ve Got a Friend” and “It’s Too Late,. “Will You Love Me Tomorrow” was a monster hit for the Shirelles in 1960, when King was only a songwriter and not yet recording artist; she re-recorded it for her solo album “Tapestry,” which after its 1971 release became what was then one of the biggest albums of all time — currently it’s 13-times platinum, and it still holds a record for the most consecutive weeks at No. 1 on the Billboard chart for a female artist (15).

Also included as part of the tribute was a video homage including stars like Sara Bareilles and Elton John. In the video, Tom Hanks said “Tapestry” was arguably the greatest music of all time.