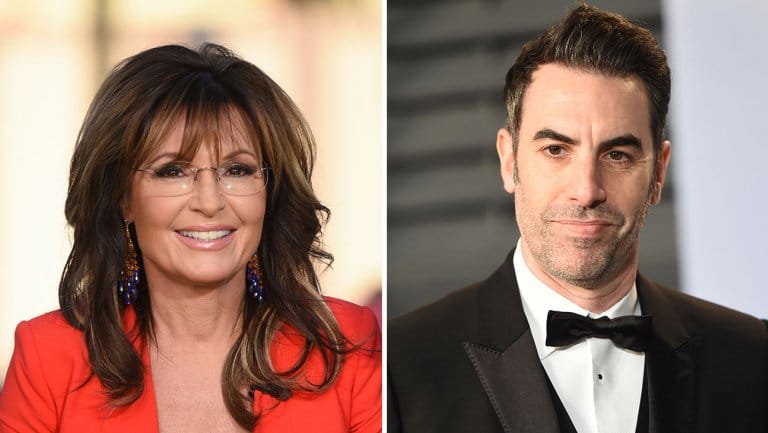 Sarah Palin on Tuesday took to Facebook to reveal that she was unknowingly interviewed by comedian Sacha Baron Cohen for his upcoming Showtime series, Who Is America?

The former Republican vice-presidential candidate said she sat down for an interview with Cohen thinking he was a wounded U.S. veteran.

“Yup — we were duped. Ya’ got me, Sacha. Feel better now?” Palin began. “I join a long list of American public personalities who have fallen victim to the evil, exploitive, sick ‘humor’ of the British ‘comedian’ Sacha Baron Cohen, enabled and sponsored by CBS/Showtime.”

She continued: “This ‘legit opportunity’ to honor American Vets and contribute to a ‘legit Showtime historical documentary’ was requested of me via a speakers bureau.”

Palin went on to say that she and one of her daughters traveled across the country to meet with Cohen, who, she says, “had heavily disguised himself as a disabled U.S. Veteran, fake wheelchair and all.”

“Out of respect for what I was led to believe would be a thoughtful discussion with someone who had served in uniform, I sat through a long ‘interview’ full of Hollywoodism’s disrespect and sarcasm — but finally had enough and literally, physically removed my mic and walked out, much to Cohen’s chagrin,” Palin elaborated. “The disrespect of our U.S. military and middle-class Americans via Cohen’s foreign commentaries under the guise of interview questions was perverse.”

Palin, who served as the ninth Governor of Alaska from 2006 until her resignation in 2009, then offered a “challenge” to Cohen, CBS and Showtime.

“Donate all proceeds to a charitable group that actually respects and supports American Vets. Mock politicians and innocent public personalities all you want, if that lets you sleep at night, but HOW DARE YOU mock those who have fought and served our country,” she wrote, adding, “Truly sick.”

Palin also claimed that “the Cohen/CBS/Showtime production team purposefully dropped my daughter and me off at the wrong Washington, DC airport after the fake interview, knowing we’d miss all flights back home to Alaska.” She added, “I wrote this off as yet another example of the sick nature that is media-slash-entertainment today.”

Palin concluded her Facebook post by letting Cohen know that the daughter who accompanied her to the interview “thinks you’re a piece of ****,” asserting that “every honorable American Vet should feel the same.”

Palin’s post comes just days after the July 15 premiere date for Who Is America? — described by Showtime as “the most dangerous show in the history of television” — was announced.

“Sacha is a comedic genius who shocks you with his audacity, bravery and inventiveness,” Showtime Networks president and CEO David Nevins said of the Boratstar. “He is the premier provocateur of our time, but not for the sake of ‘gotcha’ moments. Behind the elaborate setup is a genuine quest for the truth about people, places and politics. Nobody knows how to cause a stir like Sacha Baron Cohen, and it’s going to be fascinating to watch what happens when Who Is America? is released on the world.”

In a teaser for Cohen’s satirical half-hour series, released via Instagram, the comic — presumably in character — can be heard asking former Vice President Dick Cheney to sign his “waterboard kit.” Cheney is seen signing something and then jokes, “That’s the first time I’ve ever signed a waterboard.”

The Real Reasons You Don’t Hear from Jeff Foxworthy

How These 10 Actors Were De-Aged For Their Movies