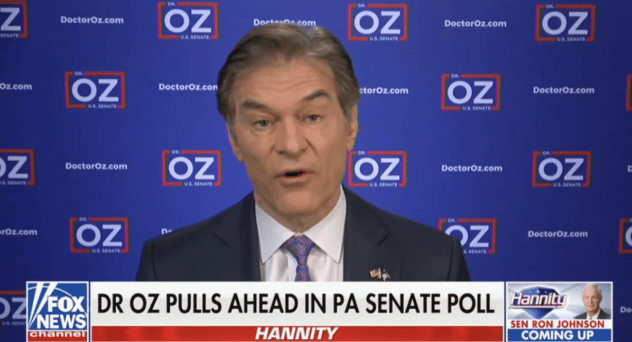 Mehmet Oz declared the commonwealth of Pennsylvania to be an Atlantic-bordering region on Monday, apparently unaware the Keystone State is hopelessly landlocked.

Oz joined Fox News host Sean Hannity to discuss the high stakes of the race to replace retiring Sen. Pat Toomey (R-PA). Oz is in a tight race with Democrat John Fetterman, according to the polls. Throughout his campaign, the former TV doctor has defended himself against accusations he is a carpetbagger from New Jersey who only registered to vote in the state in 2020.

The multimillionaire does own homes in Florida, New Jersey, New York, and Pennsylvania. Two of his Florida estates are actually on the beach.

But his Pennsylvania properties do not back up to Pennsylvania’s coastline because Pennsylvania has no coastline. That did not stop Oz from pitching a very special message to voters Monday night. In essence, Oz asked them to make him the state’s next senator so the east coast can keep its Republican representation.