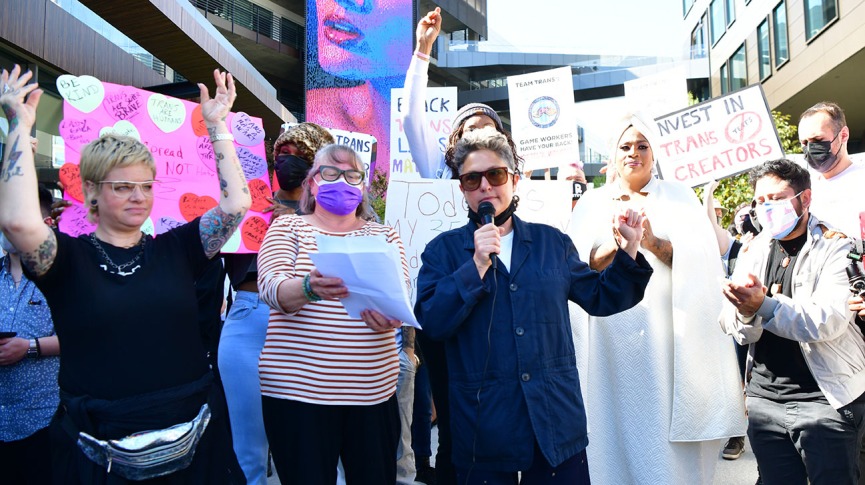 Hundreds of protesters arrived at Netflix’s Vine office on Wednesday morning for a rally to support the streamer’s trans employees, who began a virtual walkout to push back against Netflix co-CEO and chief content officer Ted Sarandos’ handling of Dave Chappelle’s latest comedy special, The Closer.

During the virtual walkout, the participating staffers will not do any work for Netflix and instead engage in content that does support the trans community and donate to charities. The walkout coincides with the public rally, organized by the activist Ashlee Marie Preston, that relocated to Netflix’s office on Vine Street to accommodate more people.

B. Pagels-Minor, the former Netflix staffer who was fired last week for allegedly leaking confidential information on the Chappelle special, appeared at the rally to support the walkout. (Pagels-Minor has denied leaking sensitive information.)

“As most of you know, I’m 33 weeks pregnant. And when I thought about why I was participating in, it’s that my son does not grow up with content that hates me,” Pagels-Minor said. “I want my child to grow up in a world where they see that their parent, a Black trans person — because I exist, contrary to what the special says, contrary to what many people say — that I am valued and I am an important person as well.”

Pagels-Minor, a former leader of the Netflix Trans* employee resource group, then read out the letter of asks to Sarandos from the employee group. Included in the list were asks for Netflix to create a fund for nonbinary and trans talent, revise internal processes for reviewing potentially harmful content, add disclaimers on shows with transphobic content and acknowledge the harm Netflix has caused to the trans community, and particularly the Black trans community. Other requests included creating a fund for trans and nonbinary talent both above and below the line, increasing the Trans* employee resource group’s involvement in conversations about potentially harmful content, and recruiting trans, especially trans BIPOC, people for executive positions at Netflix.

“We are employees, but we are members, too,” Pagels-Minor said, reading out the letter. “We believe that this Company can and must do better in our quest to entertain the world, and that the way forward must include more diverse voices in order to avoid causing more harm.”