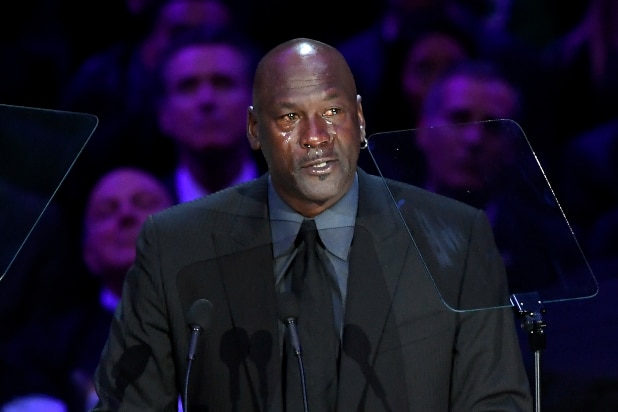 NBA legend Michael Jordan was the latest to give a moving speech about Kobe Bryant during Monday’s public memorial, bringing some much-needed levity while paying tribute to his “little brother.”

Throughout his entire speech, Jordan had tears streaming down his face, visibly showing how Bryant’s sudden and tragic death had affected him. He then used that to give the audience a much-needed laugh, by referencing the infamous “Crying Jordan” internet meme, which was taken from his Hall of Fame induction speech in 2009. “Now he’s got me, I’m gonna have to look at another crying meme for the next…” he said, before tailing off as the crowd erupted in laughter. “I told my wife I wasn’t gonna do this because I didn’t want to see this for the next three or four years.”

Jordan’s celebrated career only briefly intersected with Bryant’s. Jordan retired after the 1998 season, before returning to play two more seasons between 2001-2003. Bryant entered the league as a teenager in 1996. Because of that, Jordan said that he took on more of a mentor/big brother-type role to Kobe. “He was a nuisance, but that nuisance turned into love over time,” he continued, adding that Bryant would call him in the middle of the night to talk about the finer points of basketball like the right footwork, post-up movies, and of course, Phil Jackson’s vaunted “Triangle offense” — Jackson coached both players for the majority of their careers.