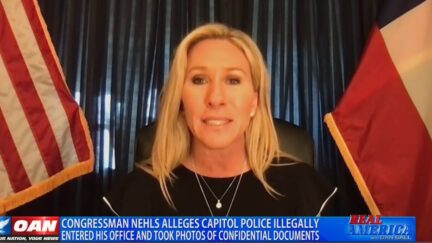 Rep. Marjorie Taylor Greene (R-GA) claimed on Wednesday that Speaker Nancy Pelosi is using her “gazpacho police” to spy on members of Congress.

Appearing on One America News, Greene said Pelosi is using the Capitol Police to target members of Congress. She cited the allegations made by Rep. Troy Nehls (R-TX), who on Tuesday claimed police had “illegally” entered his office in November and took pictures. He also said “intelligence agents” dressed as construction workers returned days later and questioned an aide.

The Capitol Police issued a statement saying, “The weekend before Thanksgiving, one of our vigilant officers spotted the Congressman’s door was wide open. That Monday, USCP personnel personally followed up with the Congressman’s staff and determined no investigation or further action of any kind was needed.”

Greene said, “So we have the Capitol Police – now, I don’t think it’s the rank and file – I think it is those in charge in the administration. And Nancy Pelosi is using them like political pawns, sending them into our offices.”

She then suggested that police had been snooping around other offices to take pictures.

Presumably, the congresswoman meant “Gestapo,” rather than the cold vegetable soup.