Julia Roberts is in a TV show. That’s a big deal. She knows it’s a big deal, that megawatt smile of hers, that Oscar-winning charisma of hers, that indelible laugh of hers, all on TV—though, to be fair, there is not much laughter in her new Amazon series, Homecoming, which is available for bingeing starting Friday.

That huge, massive, movie-star Julia Roberts-ness of it all, all harnessed into the small screen. Wouldn’t it burst?

Hey, TVs are pretty big these days, she laughs. (As in the laugh. It’s iconic for a reason.)

Still, she knows it’s a big deal because no one will stop asking her about it. She’s asked about it in press conferences. In interviews, it’s the first thing she’s questioned about. She’s on magazine covers talking about it. OK, the magazine covers aren’t necessarily a new thing—though shooting them while wearing couture and dangling off a sheer cliff and then talking to Oprah about it is.

“I get it because I see that the press, as it were, sees a clear delineation between movie actor and TV actor,” she says. “For me, I’m just looking for the best part. This just happens to be a moment in my career quite joyfully where the podcast came to me, and I met Sam, and it all kind of came together.”

That podcast would be the source material for Homecoming, a psychological thriller in which she plays Heidi, a caseworker at a facility that welcomes home soldiers and helps them transition to civilian life. And that Sam would be be Sam Esmail, the celebrated creator of the USA drama Mr. Robot, who directs Roberts in every episode of the series. The TV series. That movie star Julia Roberts is appearing in.

Roberts jokingly refers to the show as “A Tale of Two Heidis,” alluding to the fact that, in some ways, she’s playing two characters—or at least two complexly subtle different versions of the same one. 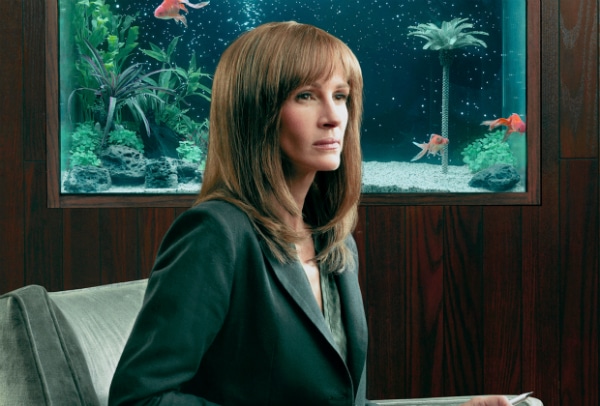 In the present day, Heidi is a sleek, passionate employee of the Homecoming Transition Support Center, where she is helping launch an experiment to help veterans deal with—and maybe even forget—their most disturbing memories from serving abroad. But that sunny, determined demeanor slowly darkens and cracks as she discovers more nefarious motives from the corporation behind the center. The show then spends half the narrative in a flashforward to 2022, to a frazzled, clearly broken Heidi, who has no memory of her time or of her work at Homecoming, a twist that shocks and disturbs her as much as it does the audience.

That Homecoming is so visually remarkable shouldn’t be surprising to anyone who has seen Esmail’s work on Mr. Robot, a show that made headlines for that very quality. But the stylish approach is arguably unexpected given the source material. The Homecoming podcast was structured as a series of phone calls and taped conversations between Heidi and her clients. Roberts likens it to an old-school radio play, a genre that thrived because it was meant to be heard not seen—storytelling on a budget. But Esmail thought the classic Hitchcockian tone of the podcast lent itself to ambitious filmmaking.

10 Actors Who Regretted Being in DC Movies

John Savage on His Role in ‘Seal Team’