Jennifer Griffin Buries Hosts of ‘The Five’ for Bringing Up Durham Probe to Suggest Ukraine Crisis Is Fake: ‘This is Deadly Serious’ 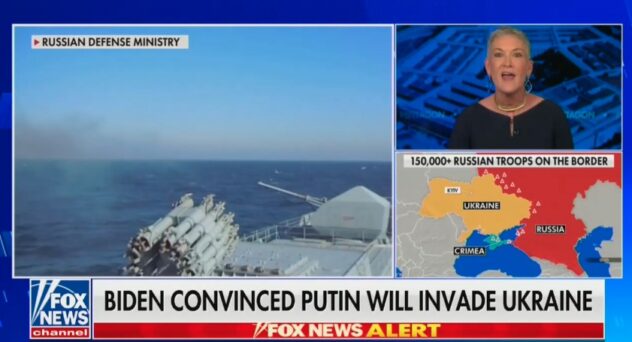 Fox News National Security Correspondent Jennifer Griffin had some sobering words for hosts of The Five who suggested the Biden administration is overhyping the crisis in eastern Europe for political purposes.

President Joe Biden delivered remarks about the situation on Friday, saying he’s “convinced” that Vladimir Putin has already “made the decision” to invade.

After the president’s speech, Five cohosts Greg Gutfeld and Kennedy suggested the administration is hyping or even faking the threat of war in eastern Europe because of the Durham investigation. In that affair, conservative media has seized upon technical jargon in a motion filed in federal court in order to claim that Hillary Clinton’s 2016 campaign hacked and spied on Donald Trump. That claim is unfounded.

“There’s something else going on here that is–that feels very, very manufactured,” said Gutfeld. “And I don’t know what it is.”

“I know what it is,” Kennedy interjected. “It’s Jake Sullivan,” she said, referring to Biden’s National Security Advisor who also worked on Clinton’s 2016 campaign. Fox News has reported that Sullivan is the unnamed “foreign policy advisor” mentioned in the indictment of Michael Sussmann who was a Clinton campaign attorney. Sussmann is under indictment as part of the Durham probe for making false statements to the FBI.

“Jake Sullivan is the national security adviser,” Kennedy continued. “And he is in deep yogurt in the Durham probe, and he’s been the one saying, ‘We have so much intelligence an invasion is imminent.’ He said that last Friday. It’s the next Friday, here we are. I don’t think Putin is going to invade.”

Kennedy then accused “point person” Vice President Kamala Harris of having a “lack of knowledge on the entire situation.”

Eventually, Griffin joined the show from the Pentagon and proceeded to bury the idea that the situation in eastern Europe is being overplayed by the Biden administration to distract from the Durham investigation.

“First of all, I need to level set with the conversation I’ve just been listening to,” Griffin began. “What we are witnessing right now is not something that’s changed in the last 24 hours. If you go back to notes that I’ve been sending out for the last two weeks, this is something we’ve been watching in terms of you–have commercial satellite imagery, you have the buildup of forces, the type of forces, the numbers of forces, things that we’ve been told in advance to look for in terms of some of the disinformation that is already starting to appear, the false flag operations in the Donbas region. All of that is ticking up.”

Jennifer Griffin Buries Hosts of ‘The Five’ for Bringing Up Durham Probe to Suggest Ukraine Crisis Is Fake: ‘This is Deadly Serious’