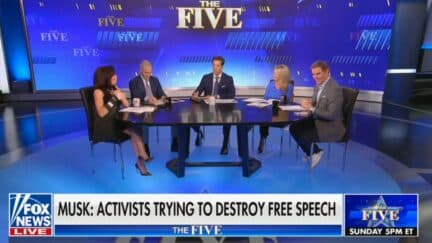 Friday’s episode of The Five took a turn for The Weird when Jesse Watters addressed a Twitter exchange between Elon Musk and Rep. Alexandria Ocasio-Cortez (D-NY).

Musk bought Twitter for $44 billion last week and has publicly floated various features and gimmicks. He has also promised to restore “free speech” to the platform while initiating mass layoffs at the company. Several brands have pulled advertising from the site as they wait to see what kind of social media company Twitter becomes under the new regime.

“What is wrong with you?” Jeanine Pirro asked for all of us.

“I’m picking up some major sexual tension between AOC and Musk,” Watters continued, referring to an exchange Musk made to a tweet from Ocasio-Cortez criticizing Musk’s plan to charge $8 a month for users to be verified on Twitter.

“So he comes out and charges eight bucks,” he added. “She puts out this video where she’s eating chicken and she’s got the nice lighting and she’s like, ‘Hey Elon, what’s up?’ And then he’s like no, ‘You’re gonna pay.’”

Watters noted that Musk responded to the video by stating, “What can I say? It was a naked abuse of power.”