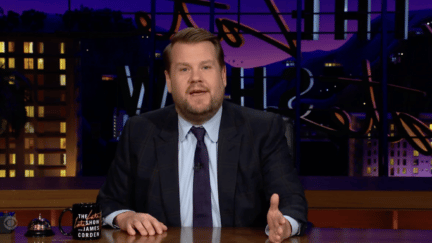 On The Late Late Show, Corden came before the cameras for the first time since it was alleged he threatened a negative Yelp review over a bit of egg white in what was supposed to be a yolk-only omelet. He also allegedly berated a server over the dish – and another server during a separate outing.

Corden copped to one accusation when explained his wife’s order was wrong twice after she was initially handed a dish she was allergic to.

“As her meal came wrong to the table the third time, in the heat of the moment I made a sarcastic comment about cooking it myself,” he said. “And it is a comment I deeply regret.”

Corden said he phoned McNally to apologize after he was blasted by him online.

“I made a rude comment and it was wrong,” he told his audience. “It was an unnecessary comment. It was ungracious to the server.”

Corden concluded, “I love that restaurant. I love the staff there. I hope I’m allowed in again one day so when I’m back in New York I can go there and apologize in person – which is something I will absolutely do.”

McNally blistered Corden last week as a “gifted comedian, but a tiny Cretin of a man” in an Instagram post. Citing two reports from shift managers who had documented alleged instances of mistreatment from Corden, McNally banned him from his restaurants.

McNally lifted the ban not long after and said Corden had “profusely” apologized (he has since edited his social media post to remove all mentions of the apology).

After the initial dustup, Corden sat down for a meal with Dave Itzkoff of the New York Times to explain his side of the story.

“I haven’t done anything wrong, on any level,” Corden said. “I feel so Zen about the whole thing. Because I think it’s so silly. I just think it’s beneath all of us. It’s beneath you. It’s certainly beneath your publication.”

McNally read the piece and was not pleased. He again went after the 44-year-old British comic.

“I’ve no wish to kick a man when he’s down,” McNally wrote. “Especially one who’s worth $100 Million, but when James Corden said in yesterday’s NY Times that he hadn’t done ‘anything wrong, on any level,’ was he joking? Or was he denying being abusive to my servers? Whatever Corden meant, his implication was clear: he didn’t do it.”