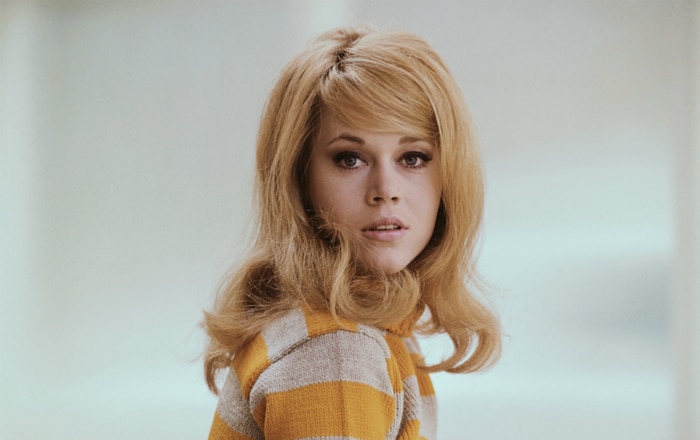 There’s a new documentary about Jane Fonda coming to HBO… you know, the blonde one in “Grace and Frankie”?

Jane Fonda made a splash in the ’80s with her funny friends and her workout tapes, but she’d actually been in the public eye for a long time before that. Her father was the legendary actor Henry Fonda, whom you might recognize if you ever had to watch Grapes of Wrath in English class. He was a movie star, and so his daughter had a spotlight on her from day one. Jane made her own name for herself, acting in theater productions and then movies. Throughout the 1960s, she was in a string of hits, most famously Barbarella, where she played a sexual space traveller from the future. She went on to win 2 Oscars in the 1970s (one more than her father), and in the 1980s she reinvented herself as a fitness guru, basically pioneering the home work-out tapes craze and VHS industry.

This documentary will tell the long and complex story of a woman you should know, as she embodies the Young Hollywood slogan: “It’s not about age, it’s about attitude!” Now in her “fifth act” (though she doesn’t look even close to her real age of 80), it could be the last serious look back at someone whose influence has been felt by multiple generations.

HBO’s “Jane Fonda in Five Acts” will deep dive into the life, work, activism and controversies of the actress and fitness tycoon.

Directed by Susan Lacy, the documentary draws on 21 hours of interviews with Fonda, who speaks candidly and frankly about her life and her missteps. She explores the pain of her mother’s suicide, her father’s emotional unavailability, 30 years of an eating disorder and three marriages to highly visible, yet diametrically opposed, men.

Featuring interviews with Robert Redford, Lily Tomlin, producer Paula Weinstein and former spouses Tom Hayden and Ted Turner, among others, the first four acts of Fonda’s life are named after the four men who shared — and hugely influenced — her personal and professional ambitions. The fifth act is named after Fonda herself, as she finally confronts her demons, reconnects with her family and resumes a successful career as both an actress and an activist, entirely on her own terms.

Fonda and Lacy spoke about the project during the HBO portion of the Summer 2018 TCA Press Tour on July 25 in Beverly Hills, where one reporter asked the icon to share what she has learned about being an “effective revolutionary.”

“I try to listen more than I talk, that’s one important thing that I’ve learned,” said Fonda, adding: “I wouldn’t use the word revolution now, but constant change yes, I’m still changing, I’m only 80, and you know, there’s still a few decades to go, if I’m lucky, and why be alive if you’re not learning and changing and growing? I think that the purpose is to try to figure out how do you keep doing it. You may not be able to make your life longer, but you can make it deeper and wider.

When asked why she agreed to share so much of her private life with the public through this doc, Fonda explained:

“Well, Susan asked me to, and I very much admire Susan as a documentary filmmaker, and my book, which has been translated into 17 languages — I still get letters and e-mails from people all the time, who have just read my book and it had a big impact on people. What surprised me is it had an impact on men as well as women. And, oddly enough, a lot of people identify with the various struggles that I’ve had. Issues with parents, issues with eating disorders, issues with men, issues with self-confidence, and so I felt that, you know, that if these things could be brought to a broader audience, that it would be informative and helpful to other people. And I was in good hands. A lot of people have asked to do documentaries about me for a long time but I wanted to work with Susan for HBO, so I said yes.”

As she recounted her life for this documentary, Jane said the biggest life change that had the most impact on her was “The Vietnam War.”

Be sure to catch Jane Fonda In Five Acts in late-September on HBO.