Geraldo Loses It on ‘Hannity’ Over Trump Immigration Policy: 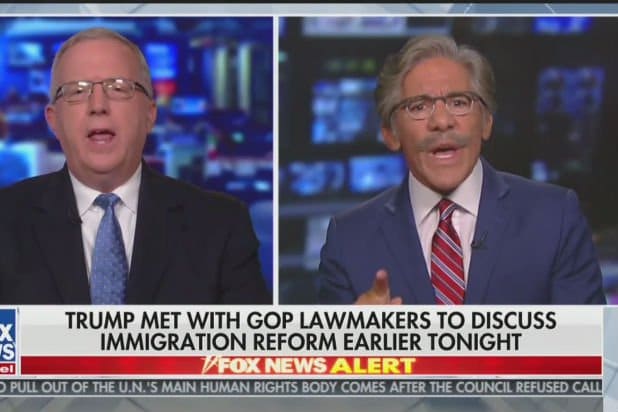 Normally-congenial pals Geraldo Rivera and Sean Hannity got into a huge disagreement Tuesday over the Trump administration’s policy of separating undocumented immigrant parents and children.

Trump and his administration have been widely condemned for the policy, in which the children are taken from their parents and housed in cages set up inside abandoned big box stores and other such structures. Hannity has been a vocal supporter of the policy and on Tuesday’s episode of his Fox News show, he said critics are just “playing politics.” He also admonished Democrats to “fix the law and do your jobs,” mirroring Donald Trump’s false claim that the policy is the result of a law passed by Democrats.

Rivera started off calmly, telling Hannity that: “Politics aside, this is cruelty as policy. This is an obscenity. This is the government of the United States and the president that we both love, advocating a system by which young children are torn from their mothers.”

“History will judge us, Sean,” Rivera said as Hannity tried to interject. “We must take a stand on something. Here is where we draw the line.”

Hannity insisted he wants “no separation” and repeated the false claim that this is the result of a law Democrats could fix with a bill that Trump would “sign immediately.”

(Excerpt) Read and See more in: The Wrap

Geraldo Loses It on ‘Hannity’ Over Trump Immigration Policy: