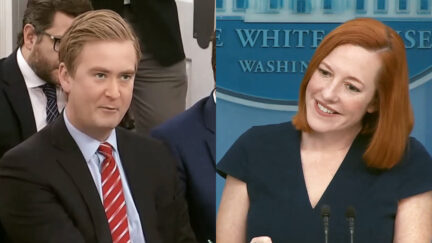 Fox News is firing back at Jen Psaki after the White House Press Secretary dissed Peter Doocy on a podcast, with the network defending him as a “terrific reporter” whose job is “to elicit truth from power for the American public.”

Psaki and Fox News’ White House correspondent have notably sparred during a number of White House Press Briefings, but have both commented that they respect each other. Psaki’s remarks were viewed by media observers as a departure from that atmosphere of friendly rivalry.

The comments at issue were made during a live recording Thursday evening of the popular podcast Pod Save America at The Anthem in Washington, D.C.

She was asked if “Peter Doocy is a stupid son of a bitch or does he just play one on TV?”

“He works for a network that provides people with questions that, nothing personal to any individual including Peter Doocy, but might make anyone sound like a stupid son of a bitch,” Psaki responded.

Doocy’s Fox News colleagues came to his defense, including anchor John Roberts, who tweeted that Doocy “makes the decisions on what topics he wants to quiz you on, and develops the questions himself.”

“His philosophy is a basic tenet of journalism,” Roberts continued. “Comfort the afflicted, and afflict the comfortable. If that makes all of us ‘stupid s.o.b.s’, so be it.”