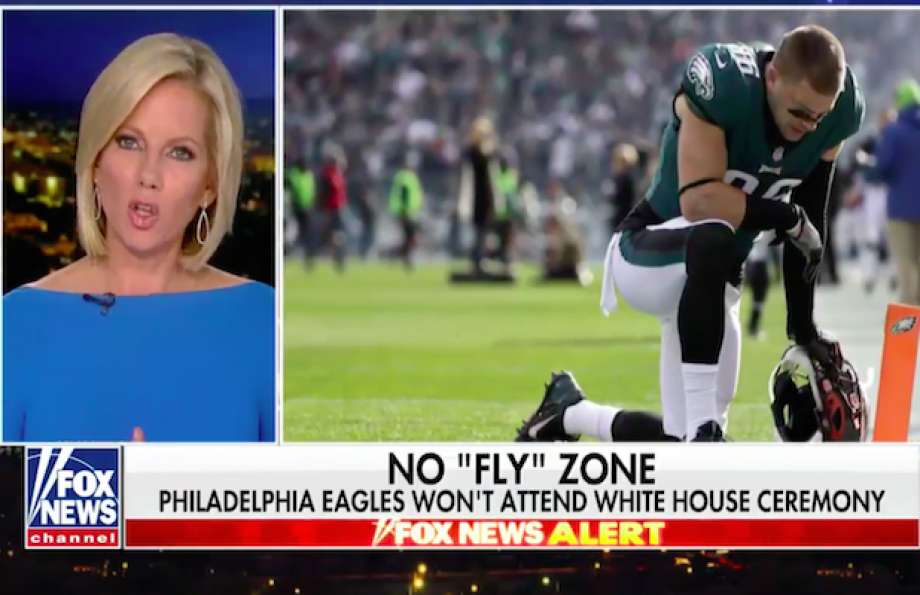 On Monday, Fox News ran a segment on the NFL national anthem protest which included misleading footage of Philadelphia Eagles players kneeling in prayer. The segment from “Fox News @ Night” anchor Shannon Bream was used to bolster President Trump’s decision to cancel a planned event with Eagles players at the White House today.

“The Philadelphia Eagles will not be visiting the White House tomorrow to celebrate their Super Bowl victory due to the national anthem controversy,” said Bream. “The Eagles who won Super Bowl LII apparently wanted to send a smaller group of players. A handful did not plan to attend but it appears the president said ‘no thanks.’

Philadelphia Mayor James Kenney tells SI Now that President Trump is using the NFL and the Philadelphia Eagles to continue to divide the country.

As she spoke, footage ran of Eagles players kneeling in prayer, not protest. During the 2017 season, not a single Eagles player kneeled for the anthem, CBS News reported.

Shortly after the error was spotted, the show’s executive producer Christopher Wallace apologized.

“During our report about President Trump canceling the Philadelphia Eagles trip to the White House to celebrate their Super Bowl win, we showed unrelated footage of players kneeling in prayer,” said Wallace “To clarify, no members of the team knelt in protest during the national anthem throughout regular or post-season last year. We apologize for the error.”