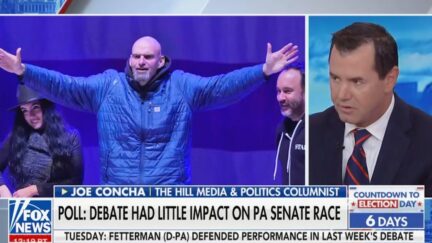 Fox News declared the debate between Pennsylvania Senate candidates John Fetterman and Mehmet Oz had “little impact” despite the fact that Fetterman, still recovering from a stroke, was heavily criticized in the media for his performance.

Fetterman’s campaign had attempted to temper expectations ahead of the event. Closed captioning was provided for Fetterman at the debate, as has been done for him in multiple media interviews.

The New York Times noted the Democrat was “showing stroke effects” and he struggled verbally at times in the debate. CNN medical analyst Dr. Jonathan Reiner criticized the Fetterman campaign for being “opaque” about the “severity” of the effects of the stroke. Fox News’ Greg Gutfeld blasted his debate performance as a “bomb,” Steve Bannon called Fetterman a “cyborg,” and even Saturday Night Live took a swipe at him.

Voters don’t appear as concerned as some of Fetterman’s critics though, as a Monmouth University poll showed the Fetterman’s support remaining at 48 percent after the debate. In the same polling sampling, Oz received only a slight one-point boost, from 43 percent to 44 percent.

“It’s really interesting because after the debate, the numbers barely budged,” she said.

The host played a clip of the Democrat fumbling a question from CNN’s Don Lemon on tackling inflation.