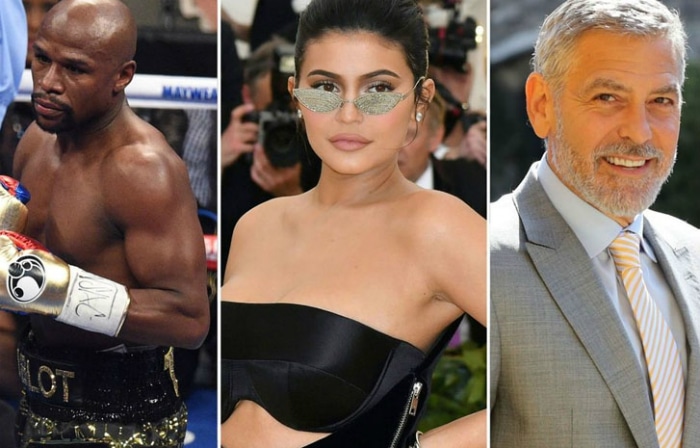 The boxer’s August 2017 fight versus Conor McGregor generated more than $550 million in revenue, with Money Mayweather earning $275 million, securing him the No. 1 spot for the second year since 2015. George Clooney ($239 mil) is in the No. 2 spot after British liquor giant Diageo purchased Casamigos, the tequila company Clooney cofounded, giving him the best annual take-home of his—or any actor’s—career. Kylie Jenner ($166.5 mil) returns to the list at No. 3, a significant jump from the 2017 newcomer’s spot at No. 59, followed by Judge Judy Sheindlin ($147 mil) at No. 4. Dwayne ‘The Rock’ Johnson, earning $124 million, rounds out the top five. The Rock (story p. 102) nearly doubled his 2017 $65 million payday, and his acting-related earnings are the largest ever recorded in the 20 years Forbes has tracked the Celebrity 100.

Featured on the cover of the August 31, 2018 issue of Forbes magazine is Natalie Robehmed’s profile of Kylie Jenner. The 20-year-old mother, reality television star and owner of Kylie Cosmetics is ranked No. 3 with $166.5 million in earnings and later this year will likely take the title Mark Zuckerberg and Bill Gates once held: the world’s youngest ever self-made billionaire.

With everyone earning at least $108 million, it’s clear the past year was not too shabby for these stars and their bank accounts.