Disney has debuted a first look at Guy Ritchie’s live-action Aladdin movie, which stars Mena Massoud as Aladdin, Naomi Scott as Jasmine and Will Smith in the role of Aladdin’s flamboyant friend, Genie. But don’t expect a look of the iconic blue being just yet.

“Aladdin” is the exciting tale of the charming street rat Aladdin, the courageous and self-determined Princess Jasmine and the Genie who may be the key to their future. Directed by Guy Ritchie, who brings his singular flair for fast-paced, visceral action to the fictitious port city of Agrabah.

Aladdin follows the basic premise of the original movie, and the trailer is beholden to those early moments, giving us a glimpse of Agrabah and the Cave of Wonders. We see Massoud as Aladdin, but before we can get any big reveal… it’s over. A true tease.

Disney first announced that a live-action version of Aladdin was in the works in October 2016. The film’s production wasn’t without its issues. Production on the film was pushed back several months in 2017, as the search for the right actors to play the lead roles of Aladdin and Princess Jasmine took longer than expected. Disney then faced an onslaught of criticism after reports came out in early 2018 that the company was using brown face paint to blend extras into the background during certain scenes. Disney responded to the allegations with a statement, according to the BBC, which read:

Diversity of our cast and background performers was a requirement and only in a handful of instances when it was a matter of specialty skills, safety and control (special effects rigs, stunt performers and handling of animals) were crew made up to blend in. 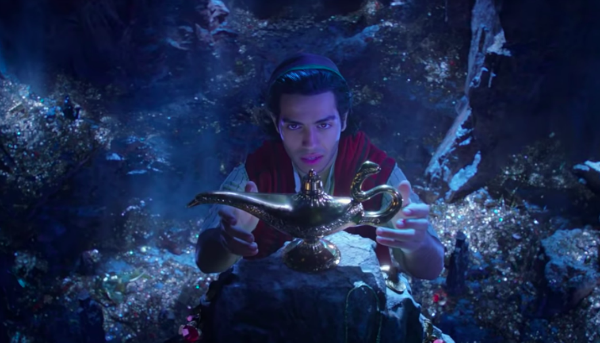 Aladdin is certainly a safer bet than Solo: A Star Wars Story, Alice Through the Looking Glass and Tomorrowland. What’s also worth noting about Aladdin is that it is the polar opposite from Solo (this year’s Disney Memorial Day movie) in a very specific way. Simply put, while Solo’s biggest artistic achievement (that it was a down-and-dirty bit of studio programmer pulp fiction) was also its biggest commercial challenge (it was an inessential Star Wars movie and very much not an event flick). Conversely, with Aladdin, sight obviously unseen, its biggest commercial hook will have at least the potential to be its biggest artistic hurdle.

Unlike every other prior Disney live-action remake, Aladdin is partially defined by a specific actor in a specific role. I am speaking of Robin Williams’ iconic turn as the Genie in the 1992 animated film. His scene-stealing supporting turn (he doesn’t show up until the end of the first act) was very much a case of “Williams being Williams.” Unlike most previous Disney toons (and the majority of the ones that followed), the original Aladdin is partially driven by a specific movie star giving a very specific movie star performance.

The Walt Disney live-action remake of their blockbuster animated gem (it earned $217 million domestic and $504m worldwide way back in 1992) is due over Memorial Day weekend, a frame where Disney has not had the best luck with big live-action fantasy films. A figure approximating Pirates of the Caribbean: Dead Men Tell No Tales ($177m domestic but $794m worldwide) would be fine-and-dandy for this Guy Ritchie-directed fantasy.

What is Clayne Crawford doing after Lethal Weapon? Net Worth in 2018