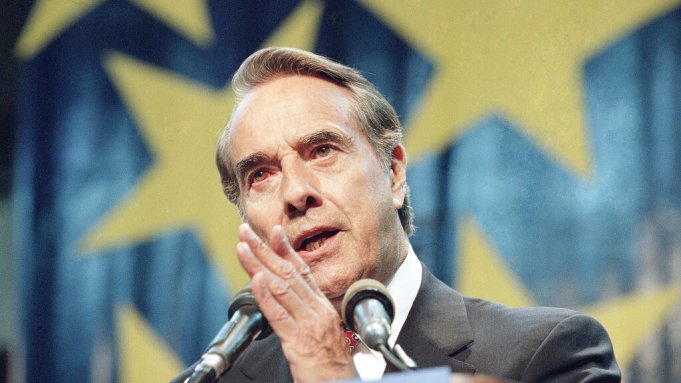 The Elizabeth Dole Foundation, named for his wife, said in a statement that Dole died early Sunday morning in his sleep. Dole had been diagnosed with stage four lung cancer earlier this year.

With a baritone voice and sharp wit, Dole was a leading figure on the political scene for more than a generation, with a career highlighted by his work on behalf of veterans and veterans issues. Dole himself faced life threatening injuries in World War II, when he was severely injured in a German attack in Italy in 1944. He spend three years in rehabilitation, and his right arm was permanently paralyzed. Dole was awarded two Purple Hearts and two awards of the Bronze Star.

Dole was from a bygone era of the Senate, a collegiality where lawmakers could vigorously attack each other on the floor yet socialize and entertain later in the evening. But he also was known for his biting sense of humor, sometimes at the expense of his own party, colleagues and even himself, that was often refreshing for reporters on the campaign trail accustomed to relentless political spin.
President Joe Biden said in a statement, “Bob was an American statesman like few in our history. A war hero and among the greatest of the Greatest Generation. And to me, he was also a friend whom I could look to for trusted guidance, or a humorous line at just the right moment to settle frayed nerves. I will miss my friend. But I am grateful for the times we shared, and for the friendship Jill and I and our family have built with Liddy and the entire Dole family.” The Bidens visited the Doles at their home in Washington in February, shortly after his diagnosis.
Dole was first elected to the House of Representatives in 1960, and later to the Senate in 1968, in a congressional career that lasted more than 35 years.
Dole’s political aspirations got a boost in 1976, when President Gerald R. Ford selected him as his running mate. Ford had dropped the more liberal Vice President Nelson Rockefeller from the ticket as he faced a serious primary challenge from Ronald Reagan on the right. Ford ended up losing anyway.
Dole ran for president in 1988, landing an initial blow on the campaign of George H.W. Bush when he topped the Iowa caucus. But Bush made a comeback in subsequent primaries. After Bush won New Hampshire that year, NBC News’ Tom Brokaw had both candidates on the air. Asked is he had any message for his rival, Dole responded, “Yeah. Stop lying about my record.” That was a reference to a series of negative ads from the Bush campaign.
Bush ended up winning the nomination and the presidency. But when Bush died in 2018, Dole, then 95, paid tribute to the former president when his casket lied in state in the Capitol Rotunda. Dole, then 95, got out of his wheelchair and gave a salute.
In 1996, Dole successfully fought off a challenge from Steve Forbes and others to win the Republican nomination, and ended up selecting Jack Kemp as his running mate. But they lost handily to Bill Clinton and Al Gore, as the incumbents ran on a rigorous economy.
(Excerpt) Read more in: Deadline