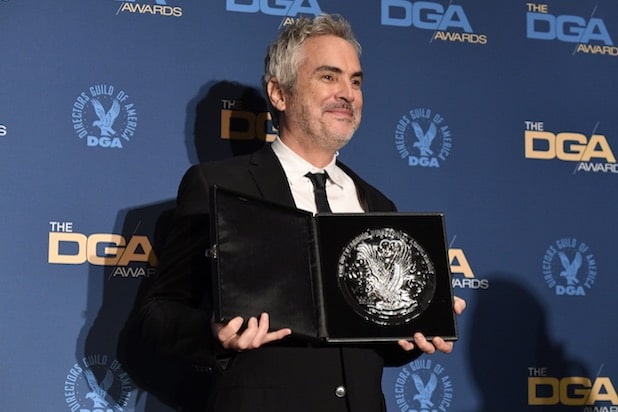 Alfonso Cuarón has been named the best director of 2018 for “Roma” at the 71st Annual Directors Guild Awards, which were handed out on Saturday night in Hollywood.

The win reinforces Cuarón’s position as a strong favorite to win the Academy Award for Best Director, and marks the fifth time in the last six years that one of the three Mexican-born directors has won the DGA Award. Cuarón also won for “Gravity,” while his close friends Alejandro G. Inarritu and Guillermo del Toro have also won in that stretch, Inarritu for “Birdman” and “The Revenant” and del Toro for “The Shape of Water.”

The win for Cuarón and “Roma” is the most significant guild award ever won by Netflix, which backed the director’s black-and-white, Spanish language memory piece.

The Directors Guild Award is one of the most reliable Oscar predictors, with the DGA winner going on to win the Academy Award for Best Director for the last five years in a row, 14 times in the last 15 years and 61 times in 70 years.

In addition, the film whose director wins the DGA historically has a greater than 75 percent chance of winning the Best Picture Oscar, but that figure has been slipping lately.  The two awards have coincided only twice in the last five years, with “The Shape of Water” last year and  “Birdman” in 2014. The other three years, Cuarón won the DGA and the Best Director awards for “Gravity,” Inarritu for “The Revenant” and Damien Chazelle for “La La Land,” while the Best Picture Oscars went to “12 Years a Slave,” “Spotlight” and “Moonlight,” respectively.

In a surprising upset, Bo Burnham won the best first-time director award for “Eighth Grade” over Bradley Cooper for “A Star Is Born.” Cooper was the only one of the five nominees who was also nominated for best director by the DGA.

“Three Identical Strangers” director Tim Wardle won the documentary prize, which had been expected to go to “RBG,” “Free Solo” or “Won’t You Be My Neighbor?”

Adam McKay, who was nominated twice, once for directing the feature film “Vice” and once for an episode of the series “Succession,” won in the latter category. Bill Hader won the award for comedy directing for his HBO series “Barry,” while Ben Stiller won in the TV movie or miniseries category for “Escape at Dannemora.”

In the Variety/Talk/News/Sports categories, the winners were Don Roy King for “Saturday Night Live” and Louis J. Horvitz for the Grammy Awards. Russell Norman won the reality-TV award for “The Final Table.”

The DGA is the third of the four major Hollywood guilds to announce its winners. The Producers Guild of America chose “Green Book” as the best-produced film of 2018, while the Screen Actors Guild gave its ensemble-acting prize to “Bohemian Rhapsody.” The Writers Guild will announce its awards on Feb. 17.

(Excerpt) Read more and see a full list of Winners in: The Wrap

Celebs Who Turned Down the Super Bowl Halftime Show